Do you want to pay a carbon tax or a higher tax?


On Tuesday, President Obama announced that he has ordered EPA to develop a new set of greenhouse gas emissions regulations for power plants, which commenters have guessed might actually mean power plants and other emitters as well. Certainly, it will include new and existing power plants (which have never before been even discussed as a target for greenhouse gas regulation), and my guess it that the EPA will have its hand plenty full without trying to expand its list of enemies.

As I have continued to stump for a carbon tax, it has become clear that messaging has to be directed at politicians that do not believe climate change is actually happening. There are plenty of Republicans and fossil-state Democrats that say they don’t believe the science is settled, but don't believe it, but do feel like they cannot antagonize Tea Party voters that will punish heretics. The new stump speech has to be oriented at providing cover to those who know a carbon tax is the right thing, but are afraid of a challenge from Tea Party candidate who is adroit enough to avoid use of the word "rape" in a sentence.

Part of my new stump speech is this: the Clean Air Act is not going away. The Obama Administration has set a timeline that will pretty much ensure that regulations will be in place by the time he leaves office. The key to that is the deadline June, 2016, by which date states will be required to submit their State Implementation Plans required under section 110 of the Clean Air Act. After that, you can bet that the new EPA regs will be here to stay.

President Obama did not reveal any details of what the new regulations will look like, a bit of a disappointment to environmental organizations. But it is clear that the new regulations will include a New Source Performance Standard for new power plants and a regulation for existing power plants as well, the latter being the most controversial part. The new regulation will be a rate standard, requiring that power plants emit no more than a certain rate of emissions per Megawatt-hour, and most watchers believe that the standard will be something like 1,000 pounds of carbon dioxide per Megawatt-hour. There will also likely be a threshold emissions amount, below which a power plant would not be regulated, and if the tailoring rule is any indication, that threshold emissions amount be 25,000 tons of CO2 per year. If all of the above turns out to be true, then there will be approximately 1,000 power plants that will have to do something to comply with the regulation (plants that emitted at least 25,000 tons of CO2 and emitted CO2 at a rate of more than 1,000 pounds per Megawatt-hour.

Interestingly, the President said he has directed EPA to make use of market base instruments in implementing the new rule. What that means is unclear, but it is probably not cap-and-trade, since that is likely not authorized by the Clean Air Act. It could involve some other form of emissions trading, such as allowing permits to be bought and sold to enable individual emitters to comply with the regulation.

How might that work? It is not unprecedented, as EPA had, earlier in its history allowed trading to achieve compliance. EPA's bubbling policy did not seem to offend any legal strictures under the Clean Air Act.

My guess is that the policy will involve emissions trading, but not cap-and-trade, at least not in form. Firms emitting over 25,000 tons of CO2 will have to get their emissions rate down to 1,000 pounds per Megawatt-hour, and they will be able to buy credits to meet that. That is, the emissions rate, measured over a year (that is my guess as to the relevant time period that EPA will set), is just the calendar year emissions divided by the electricity generated during that same calendar year. If a plant emitted 25,100 tons of CO2 in a year, and generated 50,000 Megawatt-hours of electricity that same year, its CO2 emissions rate would be 1,004 lbs/MWhr, over the limit by 4 lbs/MWhr. It cannot "buy" 4 lbs/MWhr, but must instead buy the 100 tons worth of credits necessary to get its rate down to 1,000 lbs/MWhr. My guess is that an emitter would be allowed to buy the credits to get it below 25,000 tons for a year and therefore out from under regulation altogether; that could potentially allow some small but super-dirty emitters to continue to operate for a relatively small tax.

Oddly enough, this could, under some perfect market assumptions, amount to something like cap-and-trade after all. If we assume that there are no transaction costs, and we assume that there will be trading as long as the price of credits is greater than zero, then this program amounts to cap-and-trade. Here is why. Just imagine now that the CO2 emissions and electricity produced from 2009 are fixed, and will be the same in some future regulated year, say 2018. In 2009, there were 1011 plants that emitted over 25,000 tons of CO2 and at a rate exceeding 1,000 lbs/MWhr; 483 below that rate. The total emissions from those 1,493 plants was 2,395,790,827 tons, or about 2.4 Gigatons, or about 4.8 trillion pounds of CO2. Total electricity generated by these plants was 2,777,582,189 MWhrs, for a total, 1493 plant-wide average of 1,725 lbs./MWhr. Something's gotta give in order for all 1493 of these plants to get to 1,000 lbs./MWhr. Some will have to cut back, some will switch to gas, and some will use carbon capture and storage (maybe), but there cannot be enough buying and selling to get everybody under 1,000.

This has been just an exercise. There are lots and lots of rules and adjustments that EPA would make, many of them to address the problems highlighted by this blog entry. We have seen a lot of them before in the Clean Air Act Amendments creating the sulfur dioxide cap-and-trade program. The upshot is that this is going to be a very complicated piece of regulation, putting a lot of lawyers to work. As a law professor, I guess that is good news. For the rest of you, it is a tax.

Now, does a carbon tax start to sound better?
Posted by Shi-Ling Hsu at 20:50 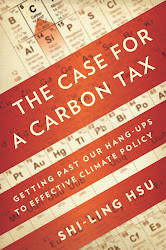